The Roman Catholic Cathedral at Clifton, nearly fifty years old, has developed a fine heritage of music making in several different styles. We have been featured on all the domestic BBC services as well as internationally – and not just with what you may think of as “church” music.

This page is to tell you a little about us and to invite you to be involved with us as a singer or instrumentalist. You are always welcome to worship with or listen to us of course.

Head of the Music Service

Our music team is led by Richard Jeffrey-Gray who leads a busy life composing, conducting and recording music for film, stage and broadcast as well as making music for the people of the Clifton Diocese. 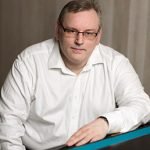 He has conducted, written and recorded music for some notable events. The worldwide broadcast of the last flight of Concorde, commissioned by the BBC, was one of these. The orchestral sonic boom caught some by surprise! From recordings alone he reconstructed, re-orchestrated and then conducted the music for two hours of wartime BBC radio comedy, broadcast live. He has also provided music for TV series and award winning theatrical productions His music has been published by OUP and others. See hoxa.net for more.

Throughout this he has been involved musically at Clifton Cathedral, conducting and writing for two consecutive Christmas TV and Radio broadcasts among others, and has written much music for the liturgy there and elsewhere.

He says that the music at Clifton mirrors his approach to other music he makes: the style of it doesn’t matter as long as it is well crafted and performed, gets the message across and lifts the spirit.

That’s why, as a musician successful at reaching people commercially, he is so pleased to lead a strongly talented team of people to serve the Clifton Diocese.

The Catholic belief is that the assembly when they gather for worship are the principal ministers in serving God when they come together to worship – this brings a different aspect to the worship at Clifton. The building itself speaks of this – of a thousand people nobody is more than forty feet from the altar with an unobstructed view.

This brings a rare and exciting dynamic to the music in our worship. The choirs are there to lead the assembly in prayer through music. The musical heritage of the Church cannot be ignored in all of this, of course. In fact, compared to musicians who only do concert performances of our musical heritage, we could be said to be putting music in its place.

This means that we, Sunday by Sunday, use music from plainsong to music newly written to fulfil the need for that day itself. So we continue the pattern from the great composers – seeing and fulfilling the need of the people now, not just recycling music from the past for the sake of it. Every piece is chosen to reflect or comment on the readings for the particular liturgy we are serving at that time. This gives our singers purpose and commitment to the music and allows them fully to realise the depth of the words and music historically and spiritually.

Three Masses address the needs of our very large congregation on Sundays – all of which involve music. The Family Mass is led by Gill McClorinan and the Sunday Singers, in turn with the Junior Choir, and music at the Solemn Mass by David Bednall and the Cathedral Choir.

The Family Mass gives us an opportunity to use modern worship music of a high standard in whatever style to lead our community in praise and prayer – and to make them think too. The music and words combine to be challenging rather than passive; here you will find something to think about as well as enjoy. The music itself lends itself to participation and is tuneful and stylish. It is not performance oriented as you would find at a show or a rock concert, but is written to engage and involve people in what is going on. So whether you want to listen, sing, or play an instrument there should be something here for you.

Music at the Solemn Mass is a different matter.

Clifton Cathedral Choir probably sings more fabulous choral music at one service than any other choir in the West Country. Imagine – the great Mass settings by composers ranging from Palestrina and Byrd through to Poulenc, Langlais and James MacMillan together with three major anthems all sung in the warm acoustic of Clifton Cathedral. We sing sacred music from across the centuries and have a reputation for performing new music as well as rare music from the Renaissance period. We welcome new singers from all backgrounds who are willing to rehearse on a Friday evening and on the Sunday morning before the 11.15am Mass. We guarantee to improve your sight-reading and hope you will enjoy the company of other fine musicians. We also run a choral scholarship scheme alongside choral exhibitioners, open to young singers with experience in the choral tradition. 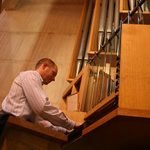 At Clifton we have one of the finest neoclassical organs in Europe made in Austria by Rieger. Its design reflects the hexagons upon which the Cathedral is based. Stephen Bryant (the Cathedral Organist) skilfully adapts all kinds of repertoire to it. The organ voluntaries reflect the intentions of the particular liturgy and their relevance is explained on our worship aids.

Besides the organ other accompanying instruments include those in the Music Group, the piano and, at Christmas, Easter and other significant times, brass and percussion.

Organ recitals are planned now and again to demonstrate the instrument and several recordings are available of it. Nicolas Kynaston’s EMI recording gained a Gramophone award among many others. A YouTube playlist is here and a soundcloud compilation here.

If you are interested in pipe organs, the specification and building details are here.
https://www.cliftonms.com/organ—organist.html

Music Service for the Clifton Diocese

The Clifton Diocese is also served from the Cathedral and plans are afoot to hold music days in conjunction with the Department for Liturgy to provide a more complete experience of formation with them.

Since we are a Music Service, we make ourselves available to help with anyone in the Diocese involved with, or who has concerns about music, so don’t hesitate to contact us. We advise on situations, repertoire, resources, organs and sound systems through the year. Our Director of Music recently commissioned a sound system as part of an RIBA award winning project and was acoustic advisor on several nationally award winning others.

The Music Service is happy to arrange for musicians to lead worship or training days at your parish.

Celebrations included in this might be Mass for special or important occasions, Confirmations, Dedications, Baptisms and so on. We can also supply musicians for Weddings and Funerals. Carol Services can also be covered.

The Music Service is funded by the Cathedral and Diocese, but we have to make a charge for these services since the funding only extends as far as diocesan liturgies. The charges go towards paying the professional musicians we use as well as the costs of administration.

You don’t need to be a Roman Catholic to be involved – you just need the desire to put music in its rightful place in the Church and to serve other people with it.

We grow week by week with our music – you can be with us on our journey, listening or actively participating by contacting: music@cliftondiocese.com

Music for weddings and funerals

The music team are also on hand to provide music for special liturgies outside of weekly masses. If you are arranging a Wedding or Funeral at the Cathedral you will speak to Richard Jeffrey-Gray who can advise on appropriate music for your occasion. We have music suggestions here. You can contact Richard at music@cliftondiocese.com or via Cathedral House when you speak to a member of staff.