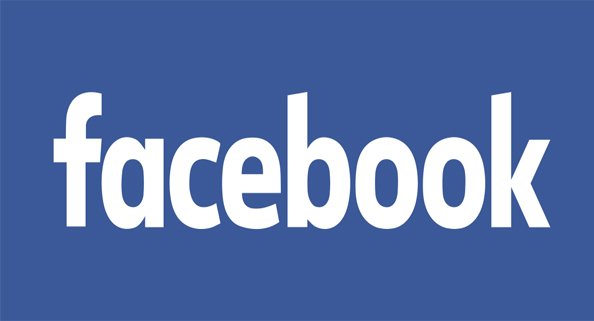 We are all called to play our part in building God’s Kingdom of peace and justice. The Commission works to encourage and support individuals and groups to take that call to heart and respond in practical ways.

Clifton Justice and Peace Commission have produced a poster for display in parishes around the Diocese to encourage us all to value our local environment and to work to protect it.  The news about the climate crisis and species loss is alarming but we, as ‘People of Hope’, can demonstrate our faith by our care for God’s creation not only in the way we live but also in our efforts to change policies and attitudes to protect the wider environment.  Pope Francis in his Encyclical ‘Laudato Si’ calls on us all to do what we can:

‘Living our vocation to be protectors of God’s handiwork is essential to a life of virtue; it is not an optional or a secondary aspect of our Christian experience. (LS #217)

‘Along with the importance of little everyday gestures, social love moves us to devise larger strategies to halt environmental degradation and to encourage a “culture of care” which permeates all of society. (LS #231)

Please feel free to print out a copy of the poster or contact justiceandpeace@cliftondiocese.com for a hard copy. 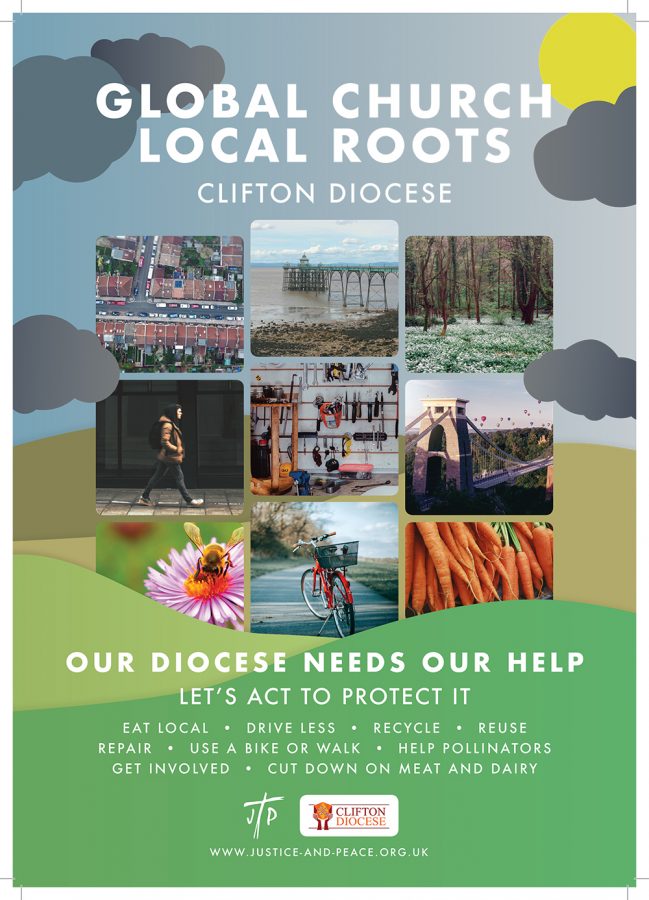 Report on NJPN Networking Day in Bristol on 8th February in St Nicholas of Tolentino Church, written by Bella Harding

A wide variety of 50+ people attended from around Clifton Diocese and others including Arundel and Brighton, Birmingham, Cardiff, East Anglia, Hallam, Liverpool and Westminster. They were joined by representatives of organisations, including CAFOD and Pax Christi, and religious, such as the Columbans.

After a welcome by Anne Peacey (NJPN Chair) and prayer, Fr Augusto Zampini gave an invigorating address where he urged us to convert our parishes to the message of Laudato Si, heard and quoted all over the world more than any papal document ever, but largely unknown in the pews. The need is to respond to the cry of the earth and the cry of the poor. He urged us to resist those who deny climate change, as all the best scientists with the most conservative consensus agree we are at a crucial tipping point and the last opportunity for urgent action. Conversion must be deeper than reason, or emotion, but involve our very deepest commitments, such as our faith. Our faith can counter prevailing utilitarianism about the world’s resources and people with the spirituality of contemplation, the individualism of society with the uniting focus of the liturgy, and the materialism with an aesthetic of beauty. He urged ‘injustice is not invincible’ and that our faith means that change is possible and we must want to leave the world a better place, which we are not doing at the moment. He emphasised the power of example, of prayer and of doing small things for God, in the little way of love of St Therese of Lisieux, contrasting the globalisation of indifference with radical transformative love for the planet and all its life.

Nikki Jones, chair of Clifton Climate Action completed the input, with news of powerful scientific evidence, making financial and investment institutions move radically in the last few months. The big lack is a change in consumer culture. She mentioned that a 10% cut in car use equals a 130% cut in emissions as much comes from production and transportation of oil. We should examine our use of energy, understanding our bills, cut our shopping, not fly, insulate our homes better. There is tremendous consumer power. Airlines have a 3% profit margin so are very vulnerable to changes in demand. She quoted ‘We are in a battle for our lives’ Antonio Guttierrez, and ‘This is our Third World War’ Joseph Stiglitz economist. Nikki set up the local charity Avon Needs Trees.

We then heard news from various parts of the country, and from the different networks present, including a major push for COP 26, the Conference of the Parties, seeking to ratify the Paris commitments world wide, which will happen in Glasgow in November 2020.

The meeting concluded with thanks to all who came and for all involved in the organisation.

Amazon Synod: The Church is people not buildings

This is the title of a recent article written by Fr Leo Dolan, a priest of Clifton Diocese, and Dr Derek Indoe, both of whom have lived and worked in Brazil, Fr Leo ministering there for more than 35 years.  Using their knowledge and experience of the region, they describe the developments over many years which have led to the Synod for the Pan Amazon region, taking place in Rome from 6th to the 27th October.  The article also explains why the Synod is relevant not only to Amazonia, but to the whole Church.  To read the article in full click here

CAFOD have produced a helpful article What is the Amazon Synod? which, in a simple question and answer format, describes what a Synod is, who is involved and what happens afterwards.

On 29th May at St Osmund’s parish rooms in Salisbury, the parish Justice and Peace group screened ‘An Inconvenient Sequel- Truth to Power’, Al Gore’s second film on climate change. More than 40 people attended to view the film and to discuss the implications.

The film is more than an ordered treaty on climate change; it is the on-going story of Al Gore and his mission to to tackle climate change on the world stage. He has devoted a large part of his life and been able to use his position of influence to encourage – and at times demand – that people speak up volubly about this issue. At times, this passion overflows into Al Gore bellowing to make his point. It is a wake up call for all of us.

The climax of the film is the COP Paris Conference; despite setbacks to the campaign, the film ends on a positive note.

At the end of the screening, following a short and reflective silence, a lively discussion took place with parties sharing concerns and ideas. A retiring collection raised approximately £120 which was shared between Christian Aid   (for their work on Climate change) and Salisbury Transition City.

Forgotten People: Forgotten Places. Being Church on the Margins was the title of the National Justice and Peace Conference held at the weekend.  Pictured below are a number of Clifton Diocese parishioners who attended the event which was organised in partnership with Church Action on Poverty.  For a report of the Conference go to https://www.justice-and-peace.org.uk/conference/ 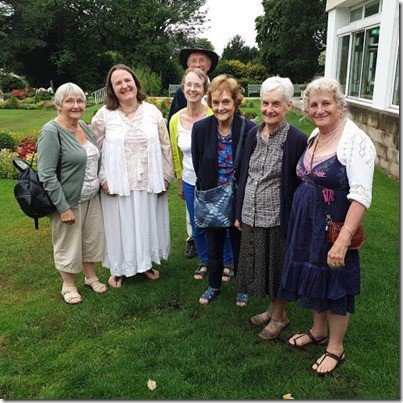 The murder by the Nazis of between a quarter and a third of all the gypsies of Europe during the Second World War is an atrocity which is little known today. While the Jewish Holocaust is well documented, the Roma and Sinti ‘Porrajmos’ (the word means the ‘devouring’ or ‘destruction’) is documented only in the records of the Nazis themselves. Estimates of the number of gypsies murdered vary between 220,000 and 500,000, with the final destruction of all the remaining gypsies in Auschwitz-Birkenau taking place on the night of 2nd-3rd August 1944.

Salisbury Justice and Peace Group held a commemorative meeting on 28th January, as a contribution to Holocaust Memorial Day. This centred round a film entitled ‘Porrajmos’, made by gypsies themselves, with support and help from the Plymouth and Devon Racial Equality Council. This was planned as an ecumenical event, and was attended by members of other churches, in addition to the Catholic community. The event was the brainchild of Anita Pheby, who chaired it, with an opening presentation by the Reverend Jonathan Herbert, the Anglican chaplain to the gypsies of the Diocese of Salisbury. The film was then shown, followed by a lively discussion, in particular of the implications it had for us in 2019, and of the need for tolerance, understanding and love for this beleaguered community, which still today experiences much discrimination and denial of human rights in many parts of Europe. The meeting ended with concluding remarks by the Reverend John Detain, a deacon in the Salisbury Catholic parishes, and prayers by the Reverend Jonathan Herbert.

Every year Pax Christi promotes the Holy Father’s World Peace Day Message on the 2nd Sunday in Ordinary Time. This is in the Liturgical Calendar cycle of prayer. Pax

Christi sends resource materials to every parish in the country to help them mark and celebrate the day. If it is not mentioned in your parish could you ask why and offer to help use the resources?

Theme for 2019 : Good politics is at the service of peace

“Political responsibility belongs to every citizen, and in particular to those who have received the mandate to protect and govern. This mission consists in safeguarding the law and encouraging dialogue between the actors of society, between generations and between cultures. There is no peace without mutual trust. And trust has as its first condition respect for the word given. Political commitment – which is one of the highest expressions of charity – brings concern for the future of life and the planet” from Vatican Press Statement.

This year’s Conference in Derbyshire took the theme, ‘In the shelter of each other the people live’ and explored building a Church and a society with the marginalised, the excluded and the most vulnerable at its heart.  Reports of the Conference including a flavour of the issues covered by the speakers and range of workshops, are available at https://www.justice-and-peace.org.uk/category/conference-2018/ .  You can view videos of the speakers recorded by Stephen Cooke of Liverpool Justice and Peace Commission by going to  https://www.youtube.com/watch?v=7kkyXpch4sg&list=PL5UUtVasGFc86xfJa4vp-uhh6jSE3bhq5 .

Report of the Conference 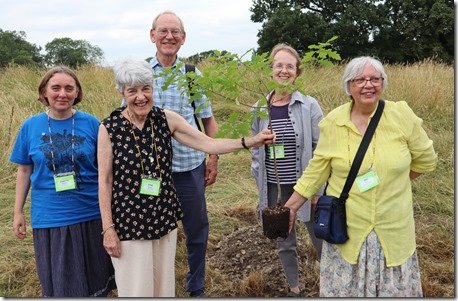 Mary Colwell has written an article about Curlews, In December 2015, the Eurasian curlew, our curlew, was put onto the red list of endangered species.

You can read her full article here: Mary Colwell – Curlews and Epiphany 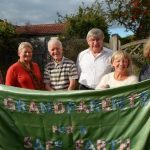 The Sheila McKechnie Foundation Campaigner Awards 2017 include Phil Kingston (pictured third from the left) for his work in setting up Grandparents for a Safer Earth.  This organisation seeks to mobilise grandparents and elders to take direct action to raise awareness of the risks of global warming and climate change.

The Carbon Neutral Diocese Group is a subgroup of the Diocesan Justice and Peace Commission.  It was formed in Summer 2015 with the aim of helping the Diocese to reduce its carbon use and eventually reach neutrality, but it is also concerned with wider environmental issues, such as water usage and recycling.  Members are Sue Ingham (Secretary of the Justice and Peace Com), Carmody Grey (Ph D student, University of Bristol), David Maggs (Diocese of Bath and Wells), Kester Ratcliffe (Easton Energy Group), Tim Coyle (Surveyor and Diocesan Trustee), Lisa Loveridge (Co-ordinator).  Derek Salmon (Diocesan Surveyor) is attending the next meeting.  Ffi please contact Lisa Loveridge on 01225 282915 or lisaloveridge@gmail.com

Laudato Si Pope Francis’ encyclical on Care of our Common Home.  For a copy and summary of the document click here.

A climate-change awareness website has been set up by a group of parishioners at St Charles Borromeo in Birmingham, ‘inspired by the letter to everyone – a CAFOD video about care for our common home by Pope Francis, Laudato Si.’  The website includes a prayer page which is overseen by a Benedictine oblate.

What’s happening in your parish/area?
Help us to let others know about your work for peace and justice by sending a report with a picture, if possible, to justiceandpeace@cliftondiocese.com

Catholic environmentalists Mary Colwell and Ellen Teague led a day of reflection on Saturday in Salisbury, focusing on the imperatives in the 2015 environment encyclical of Pope Francis – Laudato Si’. Around 40 people attended the event, ‘Laudato Si’: A Call to Action’, organised by Salisbury Justice and Peace Group and Clifton Diocese Justice and Peace Commission.  To read more of the report from Independent Catholic News, click here