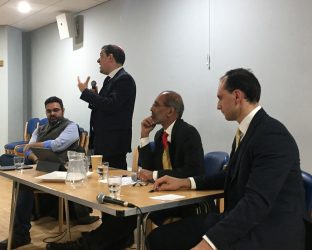 As part of Inter-Faith week 2018 and building upon the superb opportunity of listening to other faiths engage in an understanding of Mercy during the Jubilee, Clifton diocese hosted an evening’s conversation focusing on peace.  Three distinguished speakers were invited to our diocese who, together focussed on their understanding of peace held at the centre of Judaism, Christianity and Islam.

Professor Sajjad Rizvi, Dr Alexander Goldberg and Jacob Fareed Imam came together in the Apostle Room of Clifton Cathedral on Wednesday 14 November, bringing with them their own tradition’s belief and understanding of peace as part of their understanding of God and how that challenges the believer to live in reflection of that belief. The conversation was ‘chaired’ by Professor Gavin D’Costa and provided a wonderful opportunity for insight, understanding and for questions. As part of the evening’s conversation all three speakers addressed something on the issue of peace in the Holy Land.

The talk was recorded and you can hear that below.

The three speakers were:

Professor Sajjad Rizvi, University of Exeter is a Muslim and a specialist on Islamic philosophy and interfaith dialogue and has advised various government departments on Iraq, Iran, Shiʿi Islam in the Gulf, and Islam in Britain and Europe;

Dr Alexander Goldberg is a Jew and an international consultant on intercultural, interfaith and a community relations advisor to a large global humanitarian organisation and a number of international projects. He served as the Chief Executive of the London Jewish Forum and was called to the Bar in 2001;

Jacob Fareed Imam is a Catholic who was Marshall Scholar at the University of Oxford researching the Quran’s use of Biblical materials. He is currently undertaking a doctorate at Oxford investigating the Islamic roots of the Protestant Reformation. He has served as a curriculum consultant for Bethlehem University, a researcher for Oxford’s Centre for Muslim-Christian Studies, Cambridge’s Tyndale House.