A summary of the project so far…

Since its consecration in 1973, Clifton Cathedral has received critical acclaim for the serenity, simplicity and modest ‘theatre’ to its design, as well as the rare integration of materials and design. Its built form enables ‘full and active participation by all the people,’ but the experience of many users has been impaired by serious, ongoing roof leaks and the implications of inadequate (and often unreliable) heating and lighting systems. 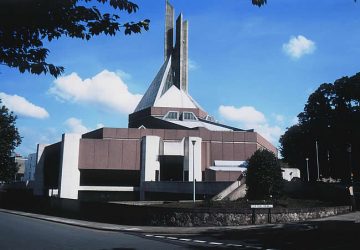 The former heating system was adapted from warehouse heating technology following the energy crisis of the early 1970s, and many members of our congregation have struggled to hear above the sound made by its fans. The heating system operated unreliably to the detriment of the building’s mission, and also to the quality of its visitor experience, which has had an impact on the Cathedral’s ability to host events that are important both to its mission and the profile of the building. The lighting had also become ineffective and detracted from what could be a world-class venue for religious and secular words and music.

To resolve the heating problems, it was decided to retain the existing principle of blown-air heating using the existing ducts designed into the form of the building. But the new system now utilizes an advanced bespoke air-handling plant with mechanical heat recovery and an efficient gas boiler, flued to the atmosphere. The mechanical heat recovery system uses a device called a thermal wheel – a heavy double-skinned heat exchanger (rather like a car radiator), which slowly revolves within the extracted air from the interior (drawn from below the sanctuary steps), and removes about thirty percent of the heat energy, returning it into the system, reducing energy loss.

In addition, a new ‘wet’ heating system was designed for the Bishop’s Walk and Blessed Sacrament Chapel. This consists of radiant panels (ceiling mounted radiators) which are recessed within the concrete ceiling coffers and provide local heat to an often used but often cold part of the building. These may now be operated independently of the main heating system for daily Masses and small services, where the Blessed Sacrament Chapel is used in preference to the Nave. Heating and hot water supply to the Cathedral Sacristies has now been restored.

The wiring throughout the Cathedral needed to be updated, but some of the wiring routes were found to be unusable. There was therefore the need for carefully positioned surface mounted containment to run the new wiring. The lighting was redesigned in such a way that the original design intent was carefully retained and re-interpreted, but with low-energy and high-quality light fittings that would improve the lighting levels and emphasize the architectural quality of the Cathedral. In certain areas, the escape lighting has also been improved, which, along with the replacement of most of the external lighting, has ensured that the building is a safe and beautiful place for those who visit and worship here.

A brief enabling project took place in June 2017 to remove the existing heating plant, which involved cutting out a section of the concrete wall to the plant-room as it was physically too small to fit in a modern air handling plant. The main project began in September and initially involved working through each section of the project methodically to identify routes for the new heating pipes, the flue, the wiring and the lighting positions. An extension was added to the plant-room to hold the air ducting, which is sound-proofed to minimise environmental noise. This was set into the rear car park with the construction of a new retaining wall in white concrete bricks. The air handling unit was a tight fit into the plant room, made awkward by its triangular shape. The incoming gas main had to be relocated, and the electrical service and panel board upgraded to a three hundred amp supply with updated switchgear.

Within the Cathedral, the radiant panels were recessed as much as possible within the coffers, with all supply pipes lagged and colour-matched to the concrete.

Two major containment routes were required: one to the Bishop’s Walk (both replacing and improving on an existing route installed for the defunct electric heating) and a second to supply the high-level lights to the Nave and Sanctuary. The Sanctuary lights needed to be installed from scaffolding, but the new fittings within the tetrahedrons over the Nave required two access platforms each to remove them, lower them, adapt the recesses and fit the lights.

After what has been a long cold winter for us at Clifton Cathedral, we are delighted to say that final commissioning is now underway.

The purpose of this project was to make sure the building remains safe and open for parishioners and visitors. Our grateful thanks must go to the Diocese of Clifton, the World War One Centenary Cathedral Repair Fund, several generous benefactors and the parishioners of Clifton Cathedral for funding this necessary work. Thanks to the skills and hard work of all involved in making this project happen, Clifton Cathedral can continue to function, serve and benefit those who come here, with minimal impact on its own fabric.