In line with similar services nationwide Gloucester Foodbank is facing increasing demands on its provision of emergency food and toiletry supplies to those in need in the city. In 2016/17 (April-March) this project handled 3,183 referrals and handed out 5,870 emergency food parcels.

December 2017 saw the Foodbank give out 7.3 tonnes of emergency food and toiletry parcels (plus Christmas hampers) to 764 Clients in crisis need – including 284 with children under 16 years of age. On December 15th Gloucester Foodbank broke a record and supplied 104 food parcels in just one day.

St Peter’s Roman Catholic Church community has responded to the call for help with astounding and unprecedented levels of support and generosity. In 2016 (calendar year), the Church community had donated 1 tonne of food supplies. In 2017, its donation for the year totalled 1.5 tonnes – making it by far and above the largest food donor in Gloucester – and this was accompanied by £2,304 in financial support for the Foodbank’s continued operation and provision of stock.

Many families, couples and individual citizens of Gloucester who are in need are benefitting from such community spirit and generosity and this continued support will help the Foodbank meet those increasing needs. 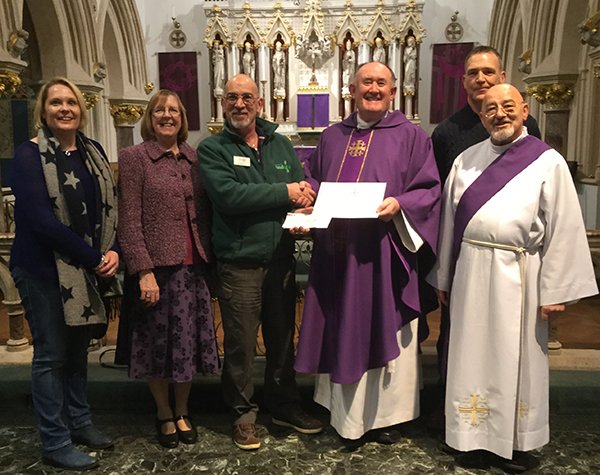 Lyn Murray, Liz Robinson, Gerry Malecki (Gloucester Foodbank), Mgr Liam Slattery, Chris Murray, Deacon Colm Robinson. It was taken after a Sunday mass recently when a cheque for £2304.00 was handed to Gerry form St Peter’s Parish. The money was all raised through parishioner donations. In return Gerry presented to Mgr Liam a certificate acknowledging the 1.5 tonnes of food donated by St Peter’s parishioners in 2017