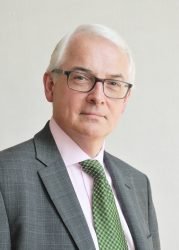 Raymond Friel, chief executive of Caritas Social Action Network, was recognised for his services to education with an OBE following his career of nearly 30 years in education, much of it within the Clifton diocese. He started in 1996 as Head of English at St Augustine’s Catholic College in Trowbridge. In 2002 he was appointed Headteacher of St Joseph’s in Salisbury and in 2004 Headteacher of St Gregory’s Catholic College where he left in 2016.

During that time, he was a national leader of education and supported other schools as well as his own. In 2016, he took up the post of general secretary of the Catholic Independent Schools’ Conference, developing a programme of formation for aspiring leaders and building up learning networks for the schools.

His books Catholic education include How to Survive in Leadership in a Catholic School. His latest book, Formation of the Heart: the Why and How of being a Catholic Today, is due to be published this year by Redemptorist Publications. He is also a literary editor and published poet. In 2021, he was appointed chief executive of CSAN, the official Catholic national agency tackling poverty and injustice in England and Wales, working with 54 Catholic grass roots charities.

Bishop Terence Drainey, chair of CSAN, said: “It is with real joy and pride that I congratulate Raymond on receiving the OBE. He has contributed so much to Catholic education and to the wider sphere. He has always offered his expertise and talents for the good of all involved in education and I am very grateful that he brings all those gifts with him into the charitable sector via CSAN.”

Raymond said: “It is an honour to be recognised for my service to Catholic education. I have to thank my family and everybody I’ve worked with in Catholic education over the years. It has always been a team effort. For an award of this kind to go to a Catholic educator shows just how far we have come as a community.”