The Service of Re-dedication of the restored organ at the Sacred Heart Church took place on Sunday 22nd November 2017 in the church. 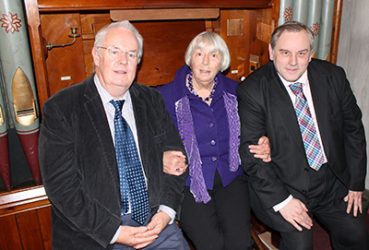 There was a good attendance of about 65 parishioners, friends and people who had contributed to the restoration fund. The Mayor of Minehead, Rosemary Parbrook, attended. The congregation included Derek Carter, whose father Robert Carter worked for George Osmond of Taunton, the organ builders who worked on the Sacred Heart organ when it was overhauled in the 1950s.

The organ-builder Lance Foy, who carried out the restoration of the organ assisted by his wife Julie and son Christopher, played introductory music including To a Wild Rose, and accompanied the 2 hymns during the service.

The service included a reading of Psalm 150, read by Ann Hankin (our Director of Music), and Intercessions read by Ann, Jenny Britnell and Mel Carroll, who play the organ for services at the church. After prayers of thanksgiving, Fr Michael blessed the organ and sprinkled it with holy water.

Fr Michael expressed thanks to all who had contributed to the raising of funds for the huge project of restoring the organ, and he presented Ann Hankin, who had done marvellous work in arranging the whole campaign, with flowers as a token of gratitude to her.

A recital was then given by Richard Jeffrey-Grey, the Director of Music for Clifton Diocese. This was an excellent demonstration of the capabilities of the restored organ. He played

A Villanelle by John Ireland; Rondo by Purcell (‘Young Person’s Guide to the Orchestra’ music);

St Anne Fugue by Bach; Nimrod from the Enigma Variations by Elgar;

A Duet, known as ‘The Immovable “Do”’ or ‘The Ciphering “C”’ (but referred to by Mr Jeffrey-Grey as ‘Stuck Note’) by Percy Grainger, with Mrs Jeffrey-Grey on high C; and an Improvisation on Ubi Caritas.

The service ended with Lance Foy playing a voluntary on the tune Thine be the Glory.

The congregation enjoyed a splendid tea afterwards in the Church Hall.

A plaque is to be affixed to the organ listing some of the history of the organ’s building, overhaul and restoration and acknowledging thanks for the financial support given for the latest restoration. The wording on the plaque is :

Subsequent overhaul by Osmonds of Taunton

Restoration and Enhancement by Lance Foy of Truro, 2017

Donations for the Restoration from members and friends of the Parish, Fairfield Trust and Minehead Town Council.