A Cheltenham school has become one of the first schools in England to win a new national award for making a commitment to develop its students to be the best they can be in competitive school sport. 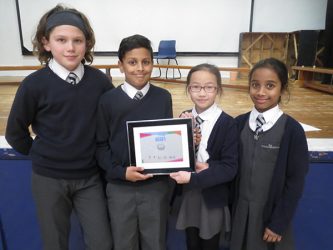 The Catholic School of Saint Gregory The Great was one of only 104 schools in the country to receive the special School Games Platinum Award. The Award is part of the School Games Mark, a government led awards scheme launched in 2012 and administered by national charity the Youth Sport Trust, which had close to 9,000 applicants this year. Its aim is to reward schools for a commitment to the development of competition across schools and into the community.

Participating in this process allows schools to evaluate their PE provision, grading them either bronze, silver or gold, and assists schools in developing an action plan for future progress. The Platinum Award is the new fourth level of the award scheme, introduced earlier this year to celebrate schools who had shown consistently high-levels of enthusiasm and commitment to school sport. Applications are only open to those schools who achieved five successive gold awards.

To achieve the gold award a school must meet a certain set of criteria, which includes engaging a high percentage of young people in both curricular and extracurricular activities, participating in a minimum number of competitions across different sports, and reaching out to target groups including young leaders, volunteers, and those previously identified as the school’s least-active pupils.

Charlotte Blanch, Headteacher, said: “This award shows that whilst we have extremely high academic standards at our school, we also focus on developing the whole child.  This award sits alongside many others we have earnt including being one of only 5 schools in Gloucestershire to have achieved the Mental Health Champions Award.  It shows how seriously we take the development of the whole child.  I’m so proud of all of the children and staff for the constant hard work they put in.”

Will Banwell, PE Subject Leader, said: “We are thrilled to have been awarded the School Games Platinum Award after achieving gold for the last five years. The award reflects the importance we put on school sport both from a competitive and introductory level. It is great to see so many children leading active and healthy lifestyles through our on-going provision in school, after school and in the wider community.”

Ali Oliver, Chief Executive of the Youth Sport Trust, said: “We are pleased to introduce the new Platinum Award this year to give these exemplary schools the recognition which they deserve. We are extremely proud of all our award winners for the passion which they have shown towards the School Games and their dedication to providing opportunities for all young people to take part in competitive school sport.

“At a time when young people are becoming less healthy and less active, the School Games provides opportunities for millions across the country to participate in sport and reap the benefits of an active lifestyle both on and off the field. Schools like St Gregory’s are really leading the way.”

All Platinum Awards will be valid for two years and successful applicants will not be required to apply again in 2018. The school will have the opportunity to maintain their Platinum Award when next applying in Summer 2019.

For more information about the School Games Mark visit