Sister Margaret Harlock has been recognised in the New Year Honours!

The New Year Honours list for 2022 has been published, marking the achievements and service of extraordinary people across the United Kingdom. Sister Margaret Harlock, Governor and former Chair of Governors at St Brendan’s Sixth Form College, is among those recognised. She has been awarded an MBE for her services to Further Education. 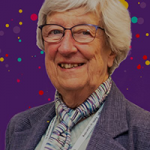 The New Year’s Honours list is published by the UK’s Cabinet Office and recognises British people for excellence in a spectrum of pursuits. This year those honoured work in a wide range of fields, including academia, arts and sports projects, school governors, community work, heritage projects and the National Health Service and Sister Margaret is part of an honours list which includes Covid expert Chris Whittey, tennis player Emma Raducanu and actor Daniel Craig.

The Member of the Order of the British Empire (MBE) is awarded for an outstanding achievement or service to the community, that will have had a long-term, significant impact and stand out as an example to others.

Sister Margaret was nominated for a variety of reasons. Her life has been, and continues to be an exemplar of public and community service. This includes her work as a former Headteacher at La Retraite (now Leehurst Swan School) and her role as a Governor and Chair of Governors at St Brendan’s. She is a highly respected member of the Association of Catholic Sixth Form Colleges (ACVIC) and is very supportive of work in the Clifton Diocese.

Sister Margaret has been part of the Board of Governors at St Brendan’s since April 2013 and has played a pivotal role in the growth and development of the Sixth Form College to one that now provides post-16 education to over 2000 students from across the Bristol, Bath and South Gloucestershire region.

Marian Curran, Principal at St Brendan’s Sixth Form College said ‘We would like to send out massive congratulations and thanks to Sister Margaret and look forward to seeing her collect her award at Buckingham Palace later this year.’