St Anthony of Padua Church is tucked away in a quiet cul-de-sac in Melksham. 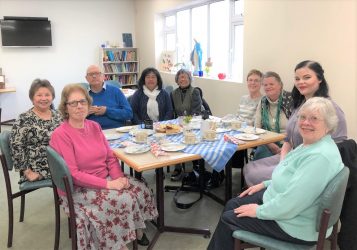 Our parishioners recently decided that it would be a good idea to invite our neighbours to tea. Invitations went out to all the neighbours and the parishioners began to bake. It was decided that a cream tea with cakes was to be the menu; some of St Anthony’s congregation are cake makers extraordinaire! Our elderly neighbours and those who are carers of family members were unable to come so cakes were delivered to them.  We realised we had a celebrity among our neighbours when Melksham’s Carnival Queen Naomi turned up! Perhaps next time she will wear her regalia! It was a fun afternoon, with lots of chatter and laughter. Neighbours were sent home with cakes for their neighbours who were unable to come, and we will definitely be inviting our neighbours again.