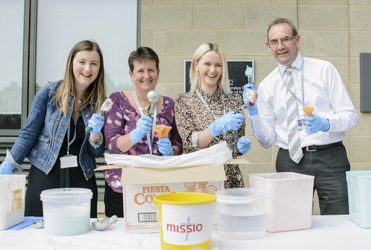 Staff and students at St Brendan’s Sixth Form College in Bristol recently celebrated their namesake Saint in the spring sunshine and were thrilled to take the opportunity to raise money for an important charity at the same time. The local Brislington College is named after the Irish Saint Brendan, whose legend states that in the sixth century he navigated his way across the Atlantic Ocean and discovered North America.

The College, who is very proud of their namesake Saint and his missionary journey, embraced the feast day and launched their fundraising campaign for Missio, the Catholic Church’s official charity for overseas mission. The sun shone on the large College, home to over 1700 ambitious 16 – 18 year olds, and as part of the celebration ice creams were given to members of the College community, whilst donations were collected for Missio. In less than an hour £77 was raised and the ice cream had vanished!

The College’s Chaplain Ann Morgan said, “This is a great start to our fundraising mission! Saint Brendan’s Day is always an important and enjoyable day for us here at College and it is fantastic to see staff and students coming together to enjoy the ice cream and sunshine, whilst also helping to raise funds for a good cause.”