On Wednesday 9th May, students and staff from St Edward’s School at Melchet Court in Romsey, Hampshire climbed to the top of Glastonbury Tor in support of CAFOD’s ‘Share the Journey’ project, inspired by Pope Francis’ call to young people to show global solidarity for refugees and migrants, 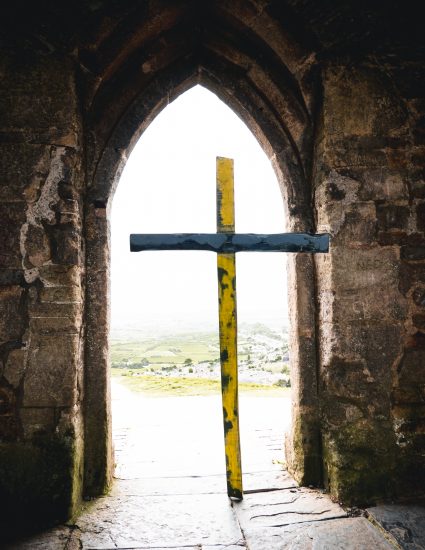 9 boys and four staff from the school in Romsey, at the easternmost end of our Diocese met with Nick and Ann Tarr representing the Bristol CAFOD office at Our Lady of Glastonbury Catholic Church, on the kind invitation of Fr Bede Rowe. Carrying a copy of the Lampedusa Cross that had been made by a member of staff at the school and holding aloft a banner sent by CAFOD central office in London, the group walked through Glastonbury before  climbing the Tor. The walk began with a brief reflection on the plight of a refugee family in Asia and a prayer led by Nick Tarr, and then proceeded to the summit of the distinctive Somerset landmark, pausing on several occasions to reflect on specific individual’s experiences of persecution, exploitation and need.

The group was stopped on a number of occasions by members of the public who were keen to know what the walk was about and Steve Whelan, Head of RS at the school was able to explain how Pope Francis is trying to galvanise a massive show of solidarity for some of our planet’s poorest people ahead of summit meetings this autumn. Upon their return to the shrine of Our Lady in Magdalene Street, the group was welcomed by parish staff who had opened the Church for the group to meet before the altar for their final reflection and prayer.

On June 13th the whole of the St Edward’s community will be ‘Sharing the Journey’ around the hills that look over the Hampshire school and on June 27th a group of staff and boys from the school will help start the Diocesan Youth walk over Bristol Downs. The Lampedusa Cross will be a feature of both days out and, having been blessed by Bishop Declan at the Education Mass on Tuesday 26th June, will begin a journey of its own around those diocesan schools who might wish to use it either for their own walks or as a feature of their liturgies in the Year of Prayer.