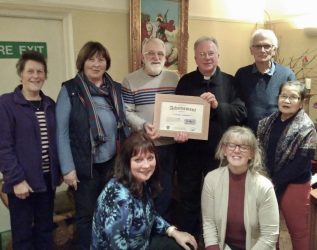 Just over four years ago in November 2014 the parish of St George’s Warminster, adopted the 90kg Rice Challenge as a way of supporting vulnerable people at home and abroad. The challenge is an initiative of Just Trading Scotland (JTS), a Fairtrade company based in Paisley, and works on the fact that 90kg is the amount of rice a farmer in Malawi has to sell to enable him a child to be sent to secondary school for a year. The parishioners were encouraged to buy the rice but not to keep it for their own use but rather, to send it to the Borderlands charity based at St Nicholas of Tolentino in Easton, Bristol. During a conversation between a parishioner and a volunteer at Borderlands it became apparent that there was always a demand at Borderlands for rice at the meal provided during the drop-in sessions and for the food parcels provided at Christmas and other times in the year. 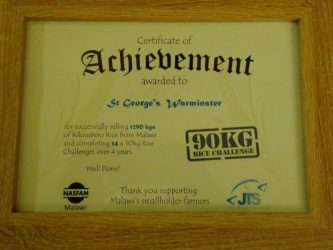 St George’s is a Fairtrade parish and thus the purchase of Fairtrade rice fulfilled its commitment to support poor producers in the developing world. Passing on the rice on to Borderlands for their work with refugees and asylum seekers fulfilled the desire to support vulnerable people at home through aiding the work of a sister parish in the Clifton diocese.

The enthusiasm for this simple form of supporting the poor was evident in the parish and it resulted in another Rice Challenge being completed in the Summer of 2015. This cycle of support for both Borderlands and Malawian rice farmers at Christmas and in the Summer has continued up to the present time.

In January of this year the parishioners were told that a Certificate of achievement had been received from JTS recognising the fact that the parish had purchased over 1.25 tonnes of rice (1290 kg) for Borderlands and completed the equivalent of 14 Rice Challenges in the process. The generosity of parishioners has provided food for many of the destitute who rely on Borderlands for support whilst providing 14 years’ worth of education for impoverished children in Malawi. A double-whammy worth celebrating.

More information about the Rice Challenge may be found at: https://www.jts.co.uk/90kg-rice-challenge